How the NBA, Nike, and Spike Lee accidentally created their own Brand of Prejudice.

Nike and Spike Lee first said it, "It's gotta be the shoes", an iconic and ironic slogan if ever one was created. On the one foot, the saying implied that basketball players were successful because of the shoes they wore, on the other foot the saying was meant as an ironic, grass is always greener  metaphor regarding what makes the professional NBA player successful versus what really makes the professional NBA player successful, the hard work they put in for years.

But what type of message did NBA basketball shoes selling for hundreds and now thousands of dollars actually deliver to teenagers in poor economic communities? Apparently the part about hard work sort of got lost in translation. The Spike Lee commercial delivered the "It's gotta be the shoes" double entendre message to teenagers so successfully it distorted the teenager's reality and left out the part about hard work.
The slogan "It's gotta be the shoes" did harm to poor communities in the following ways.
The NBA could have priced their star shoes at regular prices, or just above regular prices, but that would not promote the star quality of the athletes the shoes were representing, and therein lies the real problem.
There is no way to both create a NBA star shoe brand for a player and offer the shoes at regular or near regular prices. Yet, creating a theoretically better shoe and glitzing it up and then raising the price anywhere from 4 to 25 times the price of a "regular" tennis shoe is probably the only route a "star" player can take if they want to be seen as a legitimate celebrity and somebody worth respecting.
The above economic pricing strategy created many potentially negative societal impacts for teens in poor economic communities. Meanwhile the Police face similar inevitable situations on a daily basis and the same league that never acknowledged the inner community prejudice their own NBA star shoes created have instead chosen to focus all of their energy blaming the very group that helped them achieve their own economic success in the shoe game, Police enforcement whenever shoe thefts or shoe counterfeiting occurred.
Not giving the Police any modicum of slack in 2020 has to make us question the NBA and their own marketing tactics that have led the NBA towards teaching kids that they don't have to earn their own swag, they just can buy it, legally or otherwise.
Fair warning, VHS, 8mm video, hi-8mm video and super-vhs tapesn have over time become fragile and no one can be responsible for any loss or damage that could occur during the retransfer to digital process. However, if your Home video has already been transferred to DVD you already have a back up. The other thing to consider, if your videotape gets damaged during playback, it also means the VHS, SVHS playback machine has been damaged by the Home video tape. Outside unknown forces such as how the VHS videotape has been stored for the past 20 to 30 years will always be the cause or a contributing cause of an accident happening and the transfer house should not be held accountable. This is also why most transfer places want to simply put a VHS video on play and instantly make a recording without making additional adjustments, they know the home videos are fragile.
Contact Alessandro Machi at, vhs at AlessandroMachi.com if you want to book a VHS, SVHS to Digital Transfer session in his amazing VHS, SVHS Transfer to Digital Studio.
Alessandro's Studio and Writing Credits include;
2001 Los Angeles Emmy,
over 20 IMDB credits for work done in his studio,
Ranked top 25 out of 20,000 Lifetime Tongal Ideationists.
1985 Academy of Television Arts and Sciences Internship Scholarship Winner
at September 15, 2020

Please don't link to your site without first contacting me.

You can Supervise your own Videotape to Digital Transfer Session. 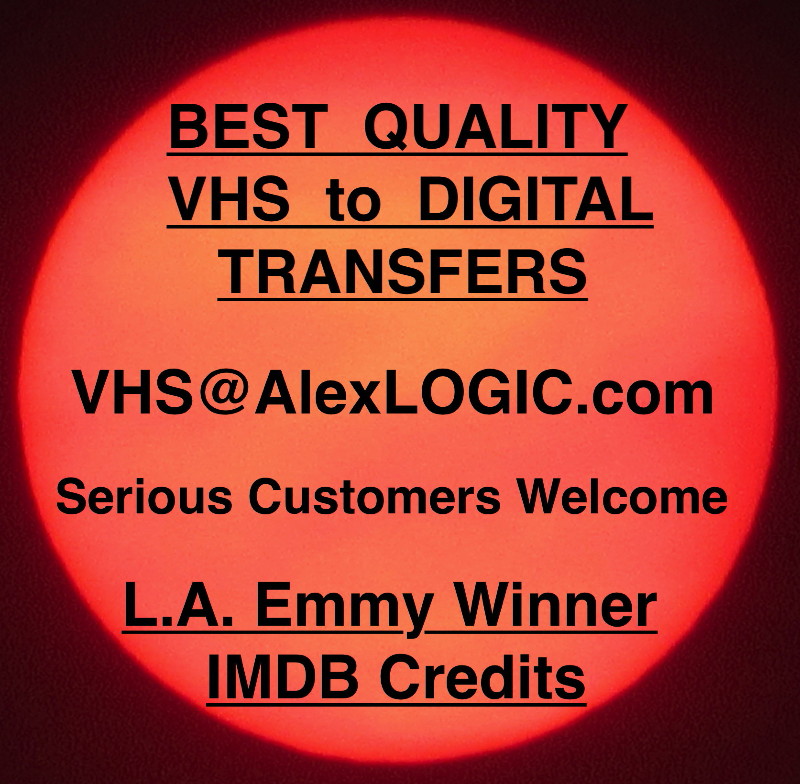